This one's for Marja-Leena... 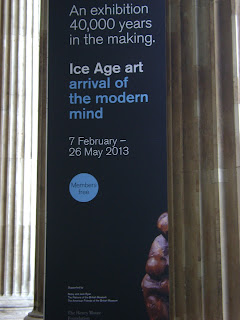 I'd waited a while. The British Museum's Ice Age Art  exhibition has been open for over a month, I'd read about it, I'd eagerly anticipated a visit, fate, life, had other plans.

Until this weekend.
Last night I attended a lecture called "Art and the arrival of the modern mind" in one of the museum's lecture theatres. It was fascinating but frustrating, everyone else had, it seemed, seen the exhibition, everyone except me.

Today I went to see for myself. So here is my amateur but very enthusiastic account of a visit to the Ice Age Art exhibition at the British Museum.


Note, the exhibition is very popular and was fully-booked.
I was able simply to turn up and wander in thanks to my membership of the museum which grants me free and unrestricted entry to the exhibitions at any time, a generous discount in the shop and the restaurants, and a member's cloakroom and lounge, in addition to special member's events and evenings.  It has been a real gift to me.


This is a thought-provoking exploration of the masterpieces of sculpture, drawing and decoration of the last Ice Age. Produced between 40,000 and 10,000 years ago, this is some of the oldest known figurative art in the world. Looking at these art works provides a fascinating insight into the earliest modern minds and their capacity to express ideas symbolically through art.

Over 100 objects are featured, including small but exquisite sculptures made from mammoth ivory, engraved drawings, ceramic models, decorated objects and jewellery from the age of the great painted caves. Some are celebrated masterpieces such as the Swimming Reindeer (13,000 years old), the so- called Willendorf Venus (25,000 years old), the Vogelherd Horse (32,000 years old) and the Lion Man (32,000 years old); others are lesser- known treasures from the collections of European museums. The author examines them in a new light, as works of aesthetic – not solely archaeological – interest, and as such forming part of an unbroken continuum of human creativity.

The compelling narrative is also illustrated with a wealth of images, from classical sculpture to twentieth-century painting and even contemporary advertising campaigns, which demonstrate surprising aesthetic parallels between these ancient works and familiar modern pieces.

In this way, Ice Age art will bring home the point that the minds that created these objects in all their diversity and inventiveness were modern minds like our own, capable of highly sophisticated thought and expression.
(British Museum) 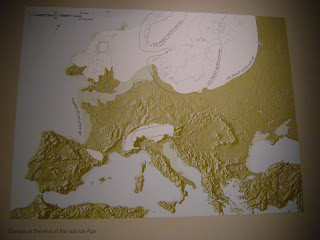 It's 40,000 years ago. Europe is emerging from the last Ice Age, Britain is joined to continental Europe, ice covers most of the country.

Times are hard, food is not abundant, your prey is difficult to catch and kill armed, as you are, only with stone tools, and if you do manage to bring down a bison or catch a reindeer, well, there are other predators ready to deprive you of your kill and, if you're not agile and smart, of your own life.


You are an early human, out of Africa, a cave-dweller, you lack sophistication, some people would even suggest that you are still a savage.
Or are you? 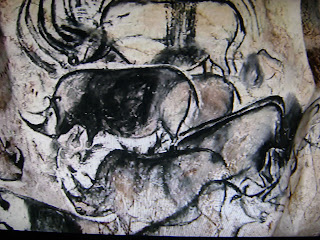 The oldest known figurative art in Europe appeared 40,000 years ago.
Our species, homo sapiens, was not solely surviving the harsh realities of life in the Ice Age, they were also creating art. They were painting the walls of the caves that gave them shelter, with vivid and breathtakingly beautiful images of reindeer and bison, lions and rhinos.

They were carving the tusks of mammoth and reindeer to create beautiful sculptures, and not just of the animals that figured so prominently in their everyday lives, but also of naked women, of pregnant women and of women in childbirth, they were making amulets to hang round their necks and they were making models of fantasy creatures. 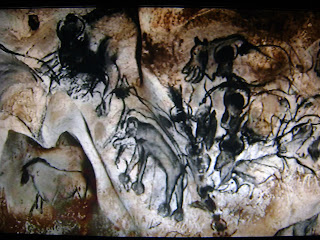 Pause to think about the time span. 40,000 years ago and our ancestors were making art.


I took few pictures during my visit to the Ice Age Art exhibition.
The lighting was subdued, cave-like, people wandered in silence, for me the atmosphere was reverential, almost religious. I wanted to look and to really see, rather than be distracted by my camera. I did, however, feel compelled to capture a few images,so here are the best of them... 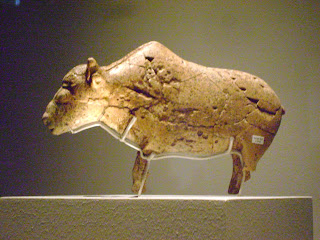 This sculpture of an adult, female bison was carved from the the tusk of a mammoth. 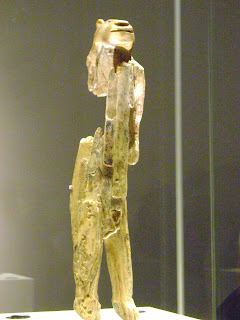 The Lion Man
Hohle Feis Cave, Baden-Wurrtenburg, Germany
What makes this statue special and so significant is that it is not a carving of a real animal. This is a figment of one of our ancestors imagination and it shows that the human mind had taken a huge leap forward.

There are theories that the Lion Man may have had a special significance, perhaps it was used in shamanic rituals devoted to giving the lion's strength and hunting skills to its owner. 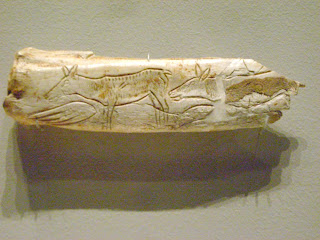 Carvings of deer on the tusk of a mammoth

This pair are quite simple but quite lovely. 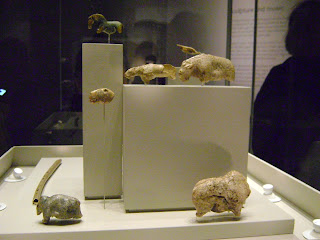 A collection of horses, mammoths, and lions.
Some of the carvings have holes in them which leads us to believe that they were designed to be worn as pendants, interestingly upside-down so that the wearer could lift them to look at them.


Why? Because they were beautiful, or was it because they would endow the animal's qualities on the wearer? 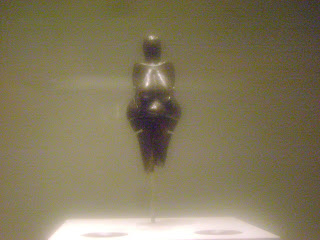 The Woman from Dolni Vestonice
The oldest known ceramic lady.

A full-figured mature lady made from earth baked in a fire. She has obviously borne children, her body bears the evidence of motherhood.

Was she revered as such? Was she seen as the perfect example of the female form? Rounded, soft, fertile? Was that her claim to fame that resulted in her appearance in a museum 30,000 years later?

I wish that I'd taken pictures of the little statues of pregnant women, some evidently at the start of their pregnancies, some heavily pregnant, some in the act of giving birth. Sadly they were too small to be captured on film, they have to be examined up close and personal to appreciate their beauty.

But I was struck by how much our ancestors revered pregnant women and how they must have been captivated and fascinated by the whole process of giving life to the next generation. It's also obvious that pregnancy and child birth would have been very dangerous times in the lives of these women, little wonder that so many statues and carvings were made, possibly to offer them protection. 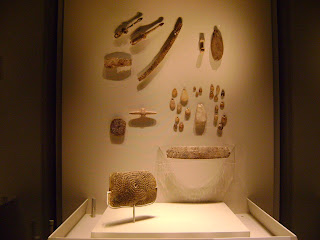 It is always subjective, is an object decorative or utilitarian? Sometimes we have clues, the beads and pendants that are found still adorning bodies that were buried so long ago, the carving placed on the breastbone of a corpse...

Sometimes, in the absence of evidence and of clues we have to use our imagination 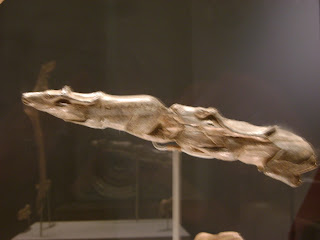 The Swimming Reindeer Carved on a mammoth tusk 13,000 years ago and found in Montastruc, France.

Not a good picture, I was a little over-excited to be, once again, up close and personal with my favourite museum piece.

But how could I not include The Swimming Reindeer?

I'll doubtless write about them again. In the museum shop I bought a small book devoted to these reindeer, written by one of the curators, Dr Jill Cook, who kindly signed my copy. I admit it, I am not averse to a little hero-worship, even at my age.

If I have one criticism, no, request, it would be that the Swimming Reindeer be given pride of place in the exhibition. But that's my own, highly personal opinion based on my devotion to this particular piece of Ice Age Art. It was a chance-meeting, a serendipitous meeting, that introduced me to this sculpture and so to a late-flowering fascination with the Ice Age.


I've collected many books on the subject of the prehistoric, several about our cousins, the Neanderthals, some devoted to cave paintings, a few weighty tomes on the evolution of the human brain, and now this one has been added to my book shelf... 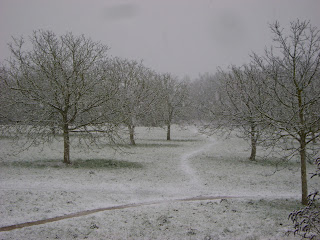 My two trips to London were exhausting. I don't feel comfortable in a crowd and I don't feel at home in a city.

So, on Sunday, as I recover from my adventures and plan a quiet day reading my books by the fire and revisiting my memories of the Ice Age Art exhibition, it's rather fitting that this is the scene that greeted me as I pulled back the curtains this morning.


The story of how I followed my visit to the exhibition with a workshop on flint napping and made my very own flint hand tool will have to wait for another post, suffice to say I am now equipped to skin a mammoth should the carcass of one happen to appear on the village green today. And if it keeps on snowing as heavily as it is now that could be a distinct possibility!

Hello! Your comments are welcome and appreciated 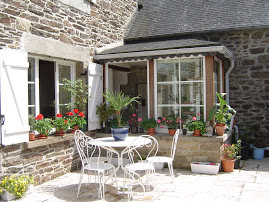 View my complete profile
Follow @YeatesJM
“ Be kinder than necessary, for everyone you meet is fighting some kind of battle. Live simply, love generously, care deeply and speak kindly…life isn’t about waiting for the storm to pass….it’s about learning to dance in the rain. ”
– - Unknown author 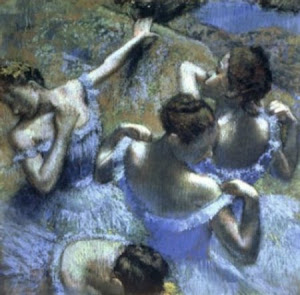 Why should we be in such desperate haste to succeed and in such desperate enterprises? If a man does not keep pace with his companions, perhaps it is because he hears a different drummer. Let him step to the music which he hears, however measured or far away. Thoreau 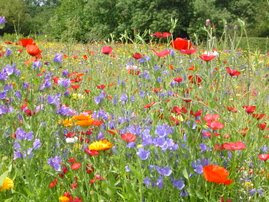 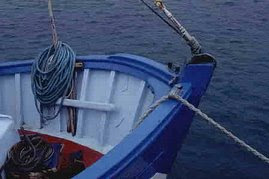 Twenty years from now you will be more disappointed by the things you didn't do than by the ones you did do. So throw off the bowlines. Sail away from the safe harbor. Catch the trade winds in your sails. Explore. Dream. Discover. Mark Twain 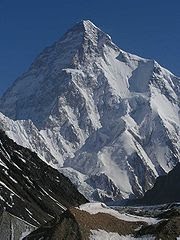 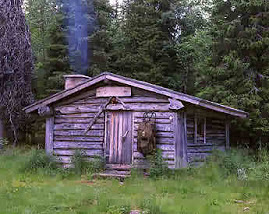 "I went to the woods because I wished to live deliberately, to front only the essential facts of life, and see if I could not learn what it had to teach, and not, when I came to die, discover that I had not lived". Henry David Thoreau